Hmmmm...I don't really recall if I've ever made such a "creative" statement in my blog as yet.  But there is hope.

Nonamedufus at nonamedufus (yeah I know, kinda redundant) gave me this award.   I know he lies, but I do congratulate him on his award as he is truly creative in both senses of the word - that and, dozo me, forgot to congratulate him earlier.  And, once again, thank you dufus, I bow in reverence to thee.

I don't mind (yet) getting awards, but I'm running out of people to tag or re-gift. Ack! Keep in mind people, I'm still a rookie here!  And I follow some of my followers' follow lists who have been so followed and rewarded by dufus.  Yep, I totally confused myself with that last statement, but then I am so easily confused. 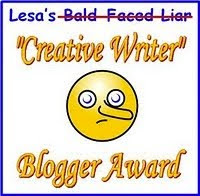 As with many of these awards, they come with rules or obligations which are:
- thank the person who gave you the award
- copy the logo and place it on your blog
- link to the person who nominated you
- tell up to six outrageous lies about yourself and at least one outrageous truth, or vice-versa
- nominate seven "creative" writers
- post links to the blogs you nominate
- leave a comment on each blog letting them know they've won the award

To tell the truth, or to lie like a rug:
Gee, lying was was easier than I thought.  Heh heh.

Now the hard part, again:
Well kids, have fun with this.  I did!