I've Got One of Those Too??

Feet are ugly - well my feet are.  I seem to have inherited all of the mismatched traits of my family:  large feet, short legs, long torso, bad hair, failing eyesight, etc., but I have no idea where my boobs came from since all of the women in my family that I've met are generously endowed.  I suspect mine come from a throwback gene from some Neanderthal relative.  At least I don't need an under wire bra, or a bra at all for that matter.  I be goin' "commando" (the feminine version).
Oh, and I've got BROAD shoulders.  Now, if any women out there remembers the 80's, you probably recall that there were shoulder pads in practically EVERY blouse, shirt (yep, even t-shirts), jackets and the like.  I'd look like a CFL player (that's NFL to you Americans) in full gear.  Not a very attractive look.  So, out the pads went.  Thanks to my Nanny (grandmother) and my dad, both of whom are/were pack rats, I saved them for "something" useful.  It turned out that they came in very handy a few years later when I attended a Halloween Stag & Doe party dressed up as Elvira.  The pads were extremely useful in enhancing and pushing up what little cleavage I had (and, boy, did some of the women get pissed at their significant others for eyeballing  me!).  Heh heh.


Not that I am complaining about my body.  I've grown accustomed to it (like I have a choice?), but the only thing I would have rather not inherited is the "European Toe".  Girls don't necessarily look at their feet in a fashion sense until they need to buy nice shoes.  It was about the time that I actually had to wear a dress that I needed not only the dress, but the shoes to go with it.  A stubborn tomboy was I.
Having settled on a dress, we went for shoes.  Since I expected to wear these shoes not more than once, maybe twice, a year, I opted to try the "open toe" style with a moderate heel.  When I looked down at my feet, my toes all painfully squished together, the only thing that came out of my mouth was, "Holy shit! What's wrong with my toes??", or something to that effect.  My mom explained that, because of our European heritage, it was known to be a "European Toe".

The toe right next to my big toe (on both feet) was longer than any of the three that were visible, looking like the appendage I wasn't supposed to be born with.  Jeez, thanks mom. 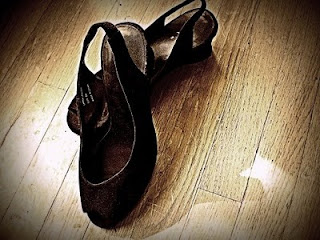