Zombies 'R Not Us

Since it seems to be the "theme" this year, I was hoping to dress up as a zombie for this Halloween but I'll have to settle for Mr. Bill because this is what I saw just before going to bed Thursday night: 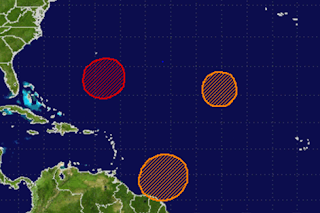 "Oh, nooooo, Mr. Bill!!"
So my face is going to have that expression for the entire weekend, if not longer. Why, you ask? The circles above represent tropical waves in the Atlantic - the prepubescence of tropical storms, if you will - that have the potential of becoming full-blown (pun intended) hurricanes. And they come in colours (sorry folks, no flavours). Red is for a high potential storm. Orange is for a medium threat. And yellow (not shown, and not for banana flavour) is for those piddly little-ass farts squeaking off the west coast of Africa that the National Hurricane Centre unilaterally decides warrants a name, merely because the NHC doesn`t want to get blamed - or sued - should said fart amass into major diarrhea when one's butt is already firmly planted on the john and there is no ass wipe in sight. That, and they can`t - or won`t - justify the expenditure of a twenty or more hour flight to confirm that said fart will just harmlessly spiral into oblivion towards the North Atlantic, meanwhile the mere naming of a storm sends thousands, if not millions, of people into a long and drawn out period of anxiety.

Sorry for that run-on rant.

To give you a bit of my perspective: 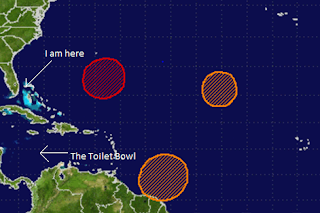 Aaaacck!
Fortunately, the 'code red' storm (once known as Hurricane Shary, now a tropical storm) is traipsing her sorry butt towards the north Atlantic. The smaller 'code orange' system has since petered out (go figure), but the larger orange wave - now known as Hurricane Tomas - is headed toward the abyss which I have affectionately named the "Toilet Bowl". The last couple of storms that headed in Tomas' direction basically stalled then swirled around for a few days between the Yucatan Peninsula and Cuba before flushing away. So, you see, hurricanes are not only potentially dangerous, but they can also be geographically educational!

Unfortunately, however, hurricanes - much like the current mindsets of the upcoming voting American public and/or their candidates - don't really know in which direction they will blow: 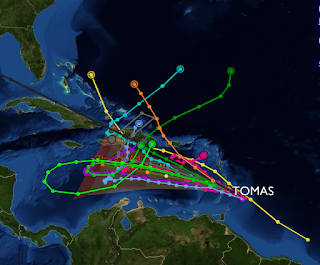 To paraphrase Bugs Bunny: "Where the fuck is Albuquerque?"
Although I will not be dressing up as a zombie this Halloween, I will have the satisfaction of knowing that one of the storms on the horizon is near its ugly end.

The levee has broke. The cork has popped. The icing is on the cake. The bubble has burst. The summit was reached. Elvis has left the building. The fat lady has sung. The farm has been bought (oops, sorry, wrong analogy) ...

It's like that long lingering sneeze has finally come to fruition with an ooohhhh, soooo satisfying "achoo", complete with tears of relief, regardless of the handful of snot.

It's been a very long, hot and sweaty summer. The temperatures this year have broke many a thermometer in some areas, not to mention that barometers were "red-lining" all over the place. And I won't get into those body parts that I never knew could perspire.

Fall has reached with its cooler weather and beautiful foilage (which we don't get here, but I do miss it).  Oh, the joy of having your hair dry on the same day you take a shower.  Yes, it's orgasmic. 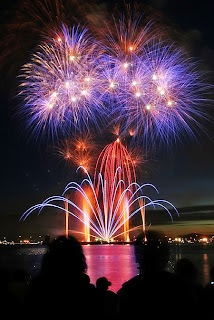 It is not often that we watch the ten o'clock news, mostly for the reason that it's the local news from Miami and generally consists of rape, murder, armed robbery, arson and so forth, and is recently inundated with political campaigning smear messages (I can hardly wait for November 3rd).  That, and I find their telecasts obnoxiously loud.

On the rare occasion we'll catch The National on CBC, the one channel where we get Canadian news and, hopefully, without the satellite hiccups so annoyingly provided by our cable company.

Two nights ago, we were watching a Canadian correspondent with a live report from Chile who was describing the recent dramatic events surrounding the rescue of the trapped miners.  He recapped the events of the mine's collapse and elaborated on the current situation at the mine where many family and friends were gathering.  To paraphrase, the reporter said, "the atmosphere here has become almost carnival like.  Rescue efforts will continue throughout the night.  The clowns are expected to arrive tomorrow." [Live report ends]

WTF??  They're going to send in the clowns??

Last night we again watched the CBC news - mostly to find out the purpose of the aforementioned grease-painted personnel and, while waiting on the follow-up news bite of the Chilean rescue efforts, another foreign correspondent was reporting on a situation of a military conflict that I believe was somewhere in Africa.  I was in the other room during the story, not really paying much attention, and the only words I heard were, "...more crisis arises in this unpopular war".  Since when is war ever "popular"??

Immediately after that story, the rescue update was aired with video coverage taped earlier in the day.  Yes, there were clowns.  And, what was not made clear the night before, they were there to entertain the family and friends of the trapped miners, not the miners themselves.

I don't mean to make light of the unfortunate use of words or phrasing by these reporters - on the contrary, their missteps brought a bit of levity into stories that are otherwise sad and dire, but without detracting from the serious nature of those situations.  Shit happens.  And, apparently, so do clowns.

What's In Your Garden?

Okay, so I stalk follow some of you that participate in this Saturday Centus thingy and I thought I'd try my hand at it, mostly because the prompt triggered a memory. What I found out is that this is hard!  One hundred paragraphs?  Sure, no problem.  One hundered sentences?  Easier and less wordy.  But to limit oneself to a mere one hundred words?? Oy! Now I understand why Tom (a regular contributor  to the Centus and an extremely talented writer) babbles on with his huge intros (and I do mean that in the nicest of ways, Tom - I really do enjoy them!).  Being so limited while writing my entry, I felt the need - nay, the compulsion - to release the traffic jam of verbosity stuck in my head, hence this intro.

I will say, however, that this was (is) fun, not to mention difficult, and if any of you haven't heard this writing challenge, please visit Jenny Matlock at ...off on my tangent... for details and other entries.


So, without further droning ado...

I had no idea what mom planted that year, but there was a lot.

"Where are the 'giant zucchini' your mom told me about?", asked Mrs. McDonald.

Not ever having seen a zucchini at that point in my life, I went out and pointed to an enormous bunch of large green things.

"Those aren't zucchini, they're pumpkins", she laughed.