Besides the other annoyances at this time of year that really - and I mean REALLY - screw up our business schedule, we have to endure annoying television commercial loops (i.e. certain ads that endlessly repeat themselves during commercial breaks).

Last year it was Dr. Dre pitching the latest in music technology for personal computers that featured him in this getup: 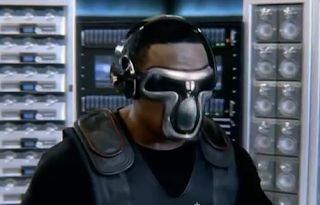 I sort of understand the necessity of the Kevlar-type vest to protect his innards from melting due the excessive amount bass emitting from the sub-woofers on the wall, but really...a nut-cup? On his face?  What, if anything, does that have to do with music?

I don't judge.  I just wonder.

And, thank you! to those who checked up on me.

Yeah, yeah.  I know I've been absent - not to mention absent minded - but I do have a few articles in the works, one of which deals with yet another appliance repair.  It will be a long one.  I promise.

In the meantime, guess who is back in town?  Murphy.

Before he even landed things went awry:  On the way to his apartment, I stopped to get some groceries he would need for the evening, expecting to take him shopping on Tuesday.  While at the checkout, the woman before me purchases some items that were marked down except the scanner would not accept the discounted price even after several attempts by the cashier to correct the problem.  As this was taking too long, I waved off the customers gathering behind me to go to another checkout.

The problem with the scanner is finally solved.  Great, I thought since I was already running late and I only had a few items, I'd be out of there in no time.

I am so naive.

Apparently, the discounted price of the items was still wrong.  As the customer and cashier were haggling out the correct price, I am rolling my eyes at the people behind me and respectfully wave them off to another checkout.

The haggling continued for another five or so minutes.  At this point, I decided to heed my own advice and go to another checkout.  By the time I repacked my basket, the problem was sorted it out and I was next in line.  I proceeded to unpack my basket for the second time.  No worries, I thought to myself since I only had a few items and nothing that was marked down.  I should be out of there in no time.

It must be the mere fact that Murphy's impending arrival causes bad luck.  I had gone to the deli counter and got some sliced meat and salmon fillets, both of which were tagged with a bar code label by the deli department.

Not only did the the label for the ham get rejected by the scanner, but the label for the salmon fillets was also rejected.  After several attempts at the bar code for the ham, the cashier looks at me and says, "I'm sorry, this product is not in our computer", to which I responded with a look that said, "And how is this my problem?"

After another bout of haggling, this time between the cashier, some know-nothing price manager and - oh my gods - the 'override' button on the keyboard, I was in and out of that store in a half an hour:  10 minutes for gathering my goods; 20 minutes at the checkout, excluding the time for customer before me.

So, I get to the apartment, turn on the water, hot water tank, open a window, etc.  I rush back to my house for feeding time at the "zoo" which leaves me about 20 minutes to relax before I pick Murphy up at the airport.

Honestly, I thought his flight would have been delayed, diverted or - god forbid - downed, but it wasn't.  In fact, it was early!

So, after all of the grief and delays I went through Monday, it got me thinking that maybe it really isn't Murphy. It might be me after all.

Again, I am so naive.

About two hours after I drop Murphy off at his place, he calls to say that the toilet tank is leaking.