As some of you may or may not know, I presently live in the "Hurricane Alley" of the Caribbean and the 5-10 split is extremely wide in my neck of the woods at this time of year so, yeah, it's technically a crap shoot.

Most bowlers aim just right or left the Number 1 pin for a strike.  Currently, our island is just left of that desired 'sweet spot' for Hurricane Irene.

There have been several tropical waves forming off of the east coast of Africa that are potential tropical storms since the onset of the hurricane season but, thankfully, most have been gutter balls.

I have found that if I talk about upcoming storms in my blog, they generally peter out or divert their respective routes to non life threatening areas.  Hence, this post (and crossing fingers, toes, eyes. etc).

Just to give you a perspective, as of about 5 p.m. EDT today: 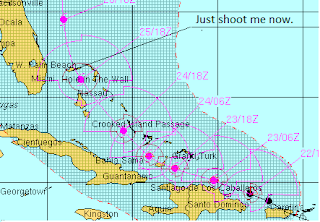 My mom just called me the "Hippy Dippy Weatherman".  Really, she did, mostly because I've been obsessed in monitoring the hurricane updates all day.  This is how it is in our household.  It can be satirically comical at times yet we cannot control many things, let alone 'Mother Nature'.  I just hope we're still laughing come Friday.

I think we will be.  What else can one do?

In the meantime, tonight's forecast:  dark.

'Tis the season.  Hurricane season, that is.  Whilst Tropical Storm Emily is making up her mind upon whom she will render her wrath (she's been rather indecisive for two days - hey, it a woman thing), we have been inundated with other problems that need to be tended to in order to make Emily's stay with us as comfortable as it can be.  Our comfort, that is.

On Monday, we discovered that the main waterline to our house has sprung yet another leak.  Fun.  Wow.  *starts humming the song to an advertisement for a theme park somewhere in western NY State*  (Okay, so you'd have to had grown up in Buffalo, Western New York or Toronto and watched Buffalo television feeds to understand that one.  Annoying sums it up quite well.)

About two weeks ago, I finally decided to check our diesel generator because the impending doom of the hurricane season does not appear to be in our favour this year.  Well, "Vin" here turned over and merely farted.  Typical.  So we called the best diesel engine tech on the island to tune-up our generator - or at least find out if we needed any parts, etc. - so that we could buy supplies should they be needed. He (the tech) was scheduled - did I tell you that Bahamians don't know the definition of "schedule"? - to do a work-up on Vin early last week.  Guess what?  (Yes, it is a rhetorical question.)

Back to the water main:  Monday was a holiday here so we were "SOL"*** on getting any repairs done on that day.  Yesterday (Tuesday), we were able to secure a contractor with a backhoe to dig a new trench which was scheduled for today.  Our reasoning for the new trench being that the existing pipe would continue to fail - it would be easier to replace the whole line rather than try to fix the current leak.  The contractor was to arrive sometime this morning to start digging.  Yeah.  Right.  Have you read the subtitle of this blog?  (Yes, also a rhetorical question.)

Enter the plumber:  We contacted the best known plumber on the island (we milk that "who you know" thing quite well, it's just the "small world" thing that can bite you in the ass sometimes) who couldn't arrive last night but did, in fact, get here early this morning.  Wonders never cease.   "Joe", the plumber (and I only call him that because Palin hasn't fallen on her sword in a few weeks - that, and I have no other lame-ass joke to insert here), wanted to do the entire job in one day so that we would not be without water.

Frankly, "Joe" is an angel.  He was absolutely prepared to do the entire job in one day.

Water supplies are ordered and delivered (about 10 a.m.).  Generator's tech is delayed but, "will reach within the hour" (that was about 10 a.m.).  Contractor for the new trench: "We have to repair a tire on the flatbed transport" (that was about 12 p.m.).  It's been overcast all day.  The forecast is indicating isolated thunderstorms which, in turn, brings isolated torrential rains.  We get a mere drizzle in our area, elsewhere it is raining buckets (normal for here but no one wants to venture out in it.  God forbid it should ever snow).

The generator tech finally arrives at about 1:30 p.m.  "Vin's" dipstick is given a clean bill of health and - other than the fuel supply - he is all good to go.

Now, the backhoe contractor and Joe the plumber were to have spoken with each other to co-ordinate the digging of the trench with the installation of the new water line in order that it happened all at once.  Apparently they know one another (considering the size of this rock, this does not surprise me).  And I have to hang around the house all day to control the dogs.  However, neither showed up, mostly due to the contractor.  The third or fourth call (I lost count) to the contractor said they couldn't come out because the torrential rains had flooded their yard so bad that they couldn't get the vehicle(s) out.  When asked about the 'flat tire' problem - the original excuse for the delay - the response was, "What flat tire?".

So, basically, I've been sitting on my ass all day waiting for people to "reach".