We are proud to announce that we have been (temporarily?) adopted by "Chewy" and "Prancer". 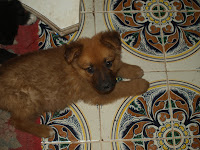 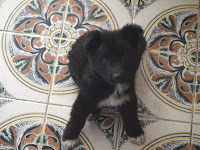 On Friday morning, a young couple came by inquiring whether or not these two young pups belonged to us, seeing that we had four dogs in the yard. Of course they weren't, but the couple couldn't take them with them - they already had ten dogs of their own! – so I decided to hold onto them in case they were escapees belonging to someone in the area. After further inspection - and a bit of de-ticking - it appears that they might be "drop-offs": pups that are unwanted by their owners. This happens way too much down here, but it is a fact of a dog's life in these islands.
This morning, however, our trusted and beloved gardener Josie tells us that the pups belonged to the new owner of the house at the end of our road. Considering the condition of these dogs, they no longer answer to that house and we still suspect the owner of the house let them out on purpose (they also have a vicious pit-bull which does not like puppies, so we are told).

Two days later, I discover that all of our dogs are ‘drama queens’: two are on hunger strikes, not having eaten their dinners in two days; Ben – our bigger Shepherd – thinks he has been banished from another family unit once again (he really is a sad-sack otherwise) and is now very timid about entering the house; and, “Garbage Guts” Elvis – the reigning “Queen”, as it were, who normally and oh, so woefully howls at feeding time for food (and will happily clean out any scraps left by the others whether they’ve finished their dinners or not), lay possum-like at the side of the pool, rolling his eyes pitifully to say, “You’ve already replaced me. I am dead to you. Just shove me into the canal, why don’t you? I’ll eventually drift out to sea.”
It's times like this I don't regret not having kids.

Whether we keep the pups remains to be seen – this depends on our original brood. I must keep them separate because of their size (our dogs will render them like they might a cat that strayed into our yard). Hopefully they will soon get their noses of out joint and accept them (Elvis is not long for this world, I’m afraid). I really didn’t think they would be so jealous of these young ones – but aren’t they soooooo CUTE???!!!
Heh heh.
.
.
Posted by 00dozo at 5:57 PM 26 comments:

It Rained On My Parade.

Well, it did. Literally.


Sometime ago I mentioned having plumbing problems and - just to further piss me off - my dishwasher went on strike. The dishwasher was, at times, somewhat co-operative and I could actually do a few loads once in awhile. For the last two months, however, it finally gave up the ghost. We needed to order a part. Part of the problem was trying to discover exactly which part was needed. Dissasembly required. Been there, done that, the part arrived today. Hooray!! We were actually expecting it yesterday but it was delayed. So, my counter top and sink is full of dirty dishes which I didn't do in anticipation of the arrival of said part.

I have four dogs: two German Shepherds; two 'potcakes' (mixed breeds). If anyone know anything about dogs, 'shepherds' are bred for, well, herding. Now, keeping flocks of sheep, goats, cows, etc. will undoubtedly involve inclement weather. Shepherd dogs are bred for this purpose, right? They should be used to rain, sleet, snow, etc., right? Years ago, I had an Old English Sheepdog - not the brightest bulb of the herding group - but he was okey dokey with bad weather. It didn't phase him in the least. We've also had German Shepherds over the years with the same attitude. Snow, "oooh - it's nice and cool!"; rain, "I prefer the snow"; thunder storms, "oooh ...ahhh... fireworks!".

We have a defective Shepherd. Her name is Chase. For the purpose of this post, I will use one of her (many) nicknames, "Velcro".

Two out of the four dogs that adopted us are afraid of thunder storms. One would guess it would be the "potcakes". You would guess wrong.

A cold front started moving in earlier in the day and, along with it, thunder. As her name would imply, Velcro was stuck to my butt wherever I moved. I finally did escape to get the dishwasher part and by the time I returned the rain and thunder had subsided.

Re-assembly now required. I get started on installing the new part. After cursing and swearing a few hundred times - and one crantini break - I finally got the new panel to sit properly in the door. (Did I mention I have a short temper??) I get the major control part partially re-installed. Here comes the rain again and the thunder along with it. Velcro now decides that she wants to crawl into the dishwasher to hide because it's the closest place to me. This goes on for the next hour or so.  The dishwasher is still incomplete.

So, as I am writing this, the zoo has been fed, the rain and thunder have subsided and come Hell or my temper, I'm going back to the problem (hey, where did these extra screws come from?)  to get my dishes washed tonight!

After screwing around part of the day trying to get the DVR to project louder audio (my moms is getting hard of hearing, whereas I can hear a spider fart in the next room), I was almost tempted to fire both components out into our still empty pool and be done with them. Of course I could not - I'm addicted to television.

So, I instead ran out to grab the newspapers and a few groceries but in my head I was still trying to figure out the problem with the A/V units. It was like a insane ear worm: one input only to the wireless speakers; two outputs from the components; split the cable input signal for recording separately from watching the television; combine and re-split the audio to the wireless speakers. (Do I really need to do this? Damn instruction manual - written in Japanese, translated into English by Italians (I'm guessing here) - which friggin' hole do I put the cable into? Where is the friggin' hole anyway? They really should put some hair around it.)

Well, you get the gist.

I return from shopping, etc. Feed the "zoo" it's dinner. Make me moms a drink. Have a smoke and another crantini. Get dinner started. Check my e-mail. Then I thought that I should do a post to get my mind off today's tribulations. I was going to compose something different altogether but wound up venting about my day's frustrations.

But, you know what? It worked! I'm calmer and more relaxed now and probably - or most definitely - about three sheets to the wind.
Posted by 00dozo at 6:16 PM 21 comments:

The Russians May Be Coming ...

... but the Germans have arrived.

I've been busy lately with visitors from Germany, hence my lack of posts and sporadic commenting.   That, and I've been busy trying to emulate the "White Tornado" tidy up the house (you know Germans - completely spotless people) just in case we invite them over before they leave in February.  They (Germans) even scrub the road in front of their own houses, or so I've heard here in the comments.

At any rate, just letting you know I haven't died, but I am old enough to remember Carol Burnett.  So, in lieu of a regular post, I offer you some great old comedy with this outtake from her variety show.