Late last year I won a cheese recipe calendar from the wonderfully cheesy people at the site formerly known as We Work For Cauliflower, hosted by Nicky, Mike and - occasionally - Jepeto and in honour of such honour, I declared I would make the recipe that correlated with each month and write a review of same.

It’s April and this month's cheese calendar recipe is "Potatoes Au Gratin" (for those of you who are not familiar with the French language, it is pronounced - more or less - "potatoes aw-grat-eh" and not as indicated in the title of this post). And I’m so proud that I have beaten the end-of-the-month review publishing deadline that I had imposed upon myself.

I had a few little problems with this recipe.  First and foremost was the cheese – no such animal exists on this rock – but the substitute (as suggested by Nicky) is just as good.  Secondly, I did not have, nor could I find, the potatoes that were called for in the recipe. No worries – I used a ‘cousin’ spud which worked just fine. Thirdly, the size of the casserole dish seemed a little large and I thought there might have been a typo. I was so wrong.  I now have a bowl full of potato slices wallowing in water in my fridge, awaiting their fate to one of my many other torturous cooking methods.

The most fretful part of this recipe is – at least for me – that it calls for “thinly sliced” ingredients. Since no one here personally knows me, I love to cook but I am an absolute klutz when it comes sharp objects, particularly knives. So to avoid possible future visits to the E.R. (which I have done quarterly on several occasions in Canada - something one would wish to avoid here), I previously purchased a mandolin – and no, it is not the stringed instrument so don’t even try to play Going to California on one.  It was definitely worth the price (an upper end model), even though I once almost sliced off the entire end of one of my pinkie fingers.

This is a very simple recipe, very tasty and would make a great side for any main entrée. So, without further adieu, I present:

*Sometimes leeks collect soil or sand in between their shoots (or leaves) as they grow. It has been suggested that you wash them before cooking: cut the shaft lengthwise to loosen the leaves and rinse in water. For this recipe, I used three leeks instead of two – even though they taste like onions, they aren’t nearly as strong but I liked the extra ‘oomph’.

**Since I could not find the Yukon golds, I just used red potatoes. And as for peeling them, forget about it (unless you don’t like the skins) – the skins are full of vitamin C, so just scrub your potatoes well if you don’t want to peel them.

***As I indicated, we do not get Oka cheese here but I found that Gruyere is an excellent substitute.

If you use all the potatoes called for in the recipe, you will need that larger casserole dish.  Personally, I like a crispy top on such dishes and used a rectangular vessel and tried to toast the potatoes before I added the cheese.  Unfortunately the visualisation électroniques foutues (pardonnez mon francais) on my oven heated up and I was unable to read the temp, resulting in slightly overcooked cheese and a overly crisp bottom (not top).  I really gots to gets me a gas range.  Next time I'll just use the broiler.

I vowed to myself that I would cook each recipe of the calendar as it is written (other than necessary substitutions) and so far each recipe is quite good on its own, but there is always room for tweaking if you should feel the need.  I normally use onions in my potato casseroles.  The leeks, though, have a milder flavour and I will probably use them more often.

Not to pat myself on the back or anything, but this week ... 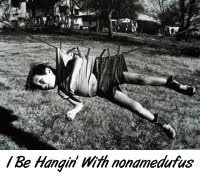 ... an honour bestowed upon the winner of a weekly caption contest hosted by nonamedufus, given  for my entry for last week's Pause, Ponder and Pun pic.   A new photo appears every Wednesday - that's tomorrow people!  Be there or be square.

But, hey, if captions aren't your thing, comments are always welcome and you just might be the recipient of the Golden Clothespin award:

Collect enough of these and you'll be hangin' with nonamedufus, too!

On another note, I was glancing through the classifieds the other day and came upon this: 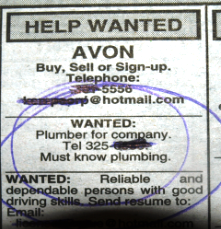 Well, I do own a plunger.  Does that count?

I am of the firm belief that there isn't anyone who hasn't been embarrassed by their parents, either by actions or by words, at one time or another.

Take my mom, for instance.  She mixes metaphors and analogies, misuses words and/or phrases, loses her train of thought, etc., but she is otherwise very intelligent and generally serious so much so that she doesn't get the punchline some of the time.   I've already introduced you to Momisms (Part 1), so here is a continuation of her flubs:

One day we were discussing gardening with one of our employees and the subject of fertilizing and composting came up.  Some people use horse manure, worm casings, chicken shit, vegetable waste among others.  Then my mom piped up with, "Bat iguana is supposed to be very good for the garden".  Bat iguana??  She meant "bat guano".

Her explanation for my fast eating habit?  When I went to a boarding school for a couple of years, I developed a habit of eating quickly because of the little amount of time allotted between lining up at the dining hall, eating, having a smoke and then getting back to class or to go and spend some free time with my friends before the dreaded "study hall".  So, if someone would ask why I finished dinner long before anyone else, she'd say, "She sniffs her food".  No mom, I "inhale" my food.

Yes, she reads this blog.

Attack Of The Killer Zucchinis!

In case any of you were not aware, late last year I won a cheese calendar from some fellow Canadiens at We Work For Cauliflower Cheese, in which contains cheese dishes for each month throughout the year.  And, as usual - yet still living up to my job description - I am late in posting my review of March's mozzarella meltdown.  Okay, so there is no mozzarella involved in this month's recipe but there was melted cheese.

The recipe for March called for zucchini as the main suspect ingredient.  The only reason I am publishing this article sooner than my lackadaisical ass generally allows is because I am, apparently, deathly allergic to this seemingly benign widow vegetable.   I've been told that I have only a few days to live.

My Grassy Knoll Bullet
(Heh, heh)
﻿
Okay, I missed April Fool's Day too.   So I'm three days late and too many dollars short.  Sue me.

Anyway, this is a wonderful springtime recipe, extremely simple and very versatile.  It can be served as an entree or an appetizer and leftovers make an excellent starter base for a cheese sauce.

Oh, right.  The cheese sauce:  If you have some leftover soup, just add some extra cheese (any type will do), some extra broth or milk if it becomes too thick, and other seasonings to taste.  It's great over steamed broccoli, cauliflower, boiled potatoes or anything else you like dressed with cheese sauce - even peas (yeah dufus, I'm lookin' at you!).


Some of you may be wondering why "pumpkin" is included in the labels for this post.  While I was looking for pictures of zucchini, I came across this: 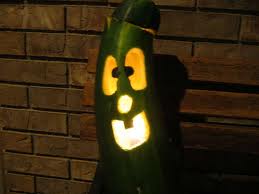 (I think this might have been found at Charlie Brown's house)
Some time ago I participated in a weekly writing challenge hosted by a fellow blogger,  Jenny Matlock.  The prompt was a photo of a pumpkin patch and the above pic reminded me of my post for that week since it also involved zucchini.  If you are interested, you can find it here.