Today is Theme Thursday and this week I thought I would throw my hat into the ring. 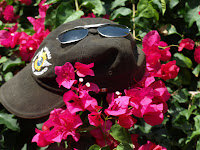 I couldn't find a ring, so I used the bougainvillea in our backyard instead.  Deceptively pretty thing, isn't it?  Don't be fooled as these suckers have long, nasty thorns.  They will bite.
And those are my sunglasses, magically attaching to my "eyeballs" when the need arises.
Not too far away from our house, there is a little grocery store that has become very handy to me since I'm always finding that we're out of an ingredient necessary for the dinner I've already started to prepare.  So, off to the store I go.
Recently,  I had to take this trip twice in as many days.  The first time was uneventful.  But on the second trip I noticed this: 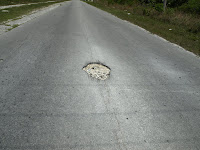 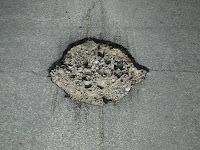 Now, potholes aren't generally inexplicable in and of themselves, but this one was particularly interesting because: (a) while they are usually found on those parts of the road most frequented by cars (and lying in wait for the next unobservant driver who will land a tyre - or two - straight into its gaping maw), this one is smack-dab in the middle of the road;  (b) there is very little debris inside the hole and the piece of pavement that once covered it is nowhere to be seen.  Absolutely nowhere. There it is...gone!; and, (c) it happened sometime during the night.
WTF??
So, one has to wonder how this tyre biter came to be.  I have no idea.  But I have a few theories:
My vote goes to the aliens.

Still, it remains a mystery.