I Baked A Cake And Ate It, Too!

Having been busy with the poopettes, another visitor - this time from Canada and who also happens to be Murphy's mom - and being a bit laid up with more stomach problems, it was my birthday in late February and, as if I didn't already have enough to do,  I had to make my own birthday cake!  Really??

Well, not really - I mean I really did make a cake but it wasn't just necessarily for my birthday. In late 2010 I won a calendar from the wonderfully cheesy people at  WWFC (that would be Nicky, CheesyMike and Sme Jepeto), with each month in the calendar featuring a different recipe with cheese as an ingredient.

February's recipe was (is):

Okay, delete the "Holy" and "Batman" from the above and that gives you name of the recipe.  If you are a lover of cheesecake, especially CHOCOLATE cheesecake, this is a great recipe and relatively simple, too! The only problem I had was with the springform pan: I usually cheat and use the store bought crusts but the ingredients were such that they called for a larger vessel. I did, however, use the pre-fab crusts for the cookie crumbs which was way easier than scraping the cream filling off of chocolate cookies (we don’t have just plain chocolate cookies here) and then crushing them. Hey, the easier the better, right?

Since I am not much of a sweets fan, I was going to forgo the topping but the cake developed a crack (and, apparently, some teeth, zits and attitude) while baking: 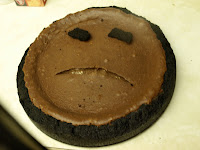 As you can see, I had no idea what I was doing slightly overdosed on the crumbs for the side crust (I really didn’t know if I was supposed to do that or not - a side crust, that is) which shrank inward, making the cake look kind of like a flattened curling rock (and I mean the sport of curling, not hair curling unless you use rocks to curl your hair - hey, whatever floats your boat).  Regardless of its appearance, the cake was lighter than a regular cheesecake - almost mousse like - and definitely fabulous!

So, here it is in all its glory, the finished product: 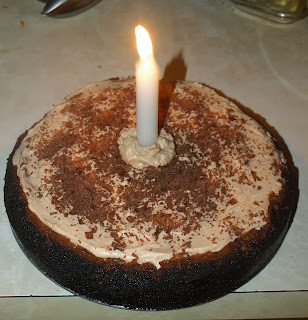 Happy Frakken Birthday To ME!!!
In hindsight, I probably could have gone with a meringue topping but that may have been just as sweet as the icing the recipe called for.  Hmm … maybe cherry pie filling for the schmear next time. Yum!

Instead of including the recipe here, I will post it in the next few days with some tips and tweaks (i.e. so your cake won't grow 'teeth' if it develops a crack, etc.).