"Puttin' On The Ritz" 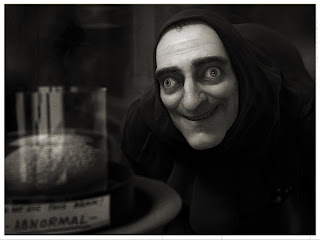 (Marty Feldman as "Igor" (pronounced "eye-gore") in Young Frankenstein)
I mean, really, how can anyone take a storm named "Igor" seriously? The forecaster from National Hurricane Centre was probably cracking up when he (or she) wrote the advisory headline, "...Igor creeping westward...".  I know I did.  One of the meteorologists on the Weather Channel even likened him to the sweet and innocent character that appears in Young Frankenstein, portrayed by the late (and great) Marty Feldman.

As I write this, Igor is merely a tropical storm, his projected path and development is unclear and will remain so for some time. I suspect that the storm's path with waver back and forth, much like "Igor's" hump did throughout the movie.

If Igor does eventually reach us, there's not much we can do about it other than prepare. In the meantime, I think I'll pop in the DVD tonight, just for shits and giggles.